Formigal lies at the northern end of the Valle de Tena, on the French border. It’s one of the biggest ski resorts in Spain with 137km of pistes. It’s a great resort that cover quite a wide area so there’s quite a lot of variety in the pistes. There are fantastic views over the Valle de Tena and into France.

Skiing in front of the peak of Anayet

I’ve season pass that covers Formigal and ski there most weeks. This is some information that I’ve put together to help people enjoy this great ski station.

Skiers at Formigal are predominantly Spanish and there are very few English tourists at Formigal which is a shame as it’s a great place to ski.

Mid-week the pistes are really quiet and to wait in a queue of more than half a dozen people is unusual which is just fantastic. The Valle de Tena is a popular place for second homes for residents of Zaragoza, Madrid or the Basque Country and therefore weekends are much busier. Queues for ski hire and lift passes can be quite lengthy and there’s often a traffic jam up to the resort.

It’s a superb resort for beginner and intermediate skiers with great blue and red pistes without huge drops off the side which are always a bit off putting!

There are excellent off piste and free ride areas. Most of the black pistes aren’t groomed just marked with poles which gives lots of opportunity for boarders and skiers to find powder when the snow is good.

The ger bar at Formigal

It does lack scary, steep black pisted runs for advanced skiers – the most challenging runs are all off piste.

There are 4 ski areas which are lift linked – Sextas, Sarrios, Anayet and Portalet. Each has a parking area, ticket booths to buy lift passes, ski and board hire as well as bars, toilets and restaurants.

This is the main station and is the furthest south. It has the most services and is where most people start their day. A big 8 man chairlift takes you up to Cantal where you can head further up the valley.

For me this is the poorest area of the resort for skiing as it’s in a windy spot and high winds strip the pistes of snow. There tends to be a lot of artificial snow here.

A great area for more advanced skiers with some of the steepest pistes in the resort. Tres Hombres is above the Sextas area and the snow is always so much better here.

The red Stadium piste is often left unpisted after heavy snowfalls and it’s a good place to look for powder.  The Bosque piste is one of my favourites in the resort – a long windy run that goes from the highest to the lowest point of the station and the only that passes through woodsin the resort.

A sheltered flat bottomed valley with gentle runs along the bottom perfect for beginners. Three button lifts at the end of the valley give access to some excellent steeper runs. More experienced skiers should head for the Escarra and Huegas button lifts – all the pistes from these lifts are good. Make sure you stop for a beer in the Iglu bar.

Chilling at the Iglu bar

It’s quite a sheltered spot and snow tends to collet there and often the best snow conditions in the resort can be found here. It’s also a good place to head on a cold, windy day.

It’s a long windy road up to Sarrios so don’t head up here to park – quicker to head over on the lift from Sextas.

Another nice area to ski – the blue Anayet run is my wife Anna’s favourite warm up run. Not lots of runs but quite a few good ones and there’s good views.

It has a nice atmosphere and it’s a good place to stop for lunch or a beer – the bar at the end of the building has good tapas and is one of the best places to eat in Formigal.

Beware of the south facing runs underneath the Garmet lift. They aren’t steep but get very soft and cut up in warm weather.

Some nice long runs here and it’s quite high right near the border so the snows usually good. Excellent views of Pic du Midi d’Ossau and Anayet peaks.

Also home to the wonderful ‘rat-track’ – basically a button lift which is dragged behind a piste machine and you get towed along to the start of some pistes. I’ve never seen anything like this in the Alps. 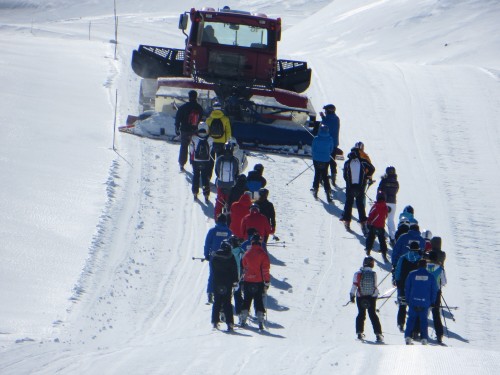 The rat track at Formigal

The blue Rinconada and red Espelunciecha runs are both interesting varied runs with good views and really good fun.

Quite a few good eating places at the bottom although they mostly have outside seating and it’s an exposed spot on a windy day.

The main Sextas station has the most ‘taquillas’ to buy lift passes and the ski hire is bigger there too. Even with this extra capacity there is often lengthy queues for both ski hire and passes – particularly on Friday and Saturday mornings.

To avoid a long wait on your first morning it’s well worth pre-ordering a pass online which you can then collect from a machine which usually doesn’t have a queue. Many hotels sell passes too but a lot don’t really promote the service – it’s worth checking with reception.

There are ski hire places in every village in the valley and it’s easy to hire equipment. Most are open in the evenings and it costs no more to pick up your kit the evening before. I always think this is a great idea and gives you a chance to properly try on your boots unhurriedly. There’s no need to pre-book ski hire.

January and February are the most snow sure months at Formigal. December often has pretty good snow on-piste but not enough to get off piste much.

March has some lovely days but the sunshine is strong and the snow can get pretty slushy by the afternoon.

Between Christmas and New Year is packed but most of the rest of the season is quite quiet mid week. The third or final week of February is half term – or ‘semana blanca’ – and gets busy.

I hope this inspires you to come and enjoy Formigal. Any questions ask them below and I’ll do my best to help.

The ger bar at Formigal

With Anna and Eva at Formigal

Chilling at the Iglu bar

The rat track at Formigal

The way to keep your beer cold

Lunch on the pistes Spanish style

4 thoughts on “Formigal – an insiders guide”

The wild flowers of the Pyrenees are justifiably famous. Known as the flower garden of Europe the alpine flora is spectacular throughout the END_OF_DOCUMENT_TOKEN_TO_BE_REPLACED