In the Pyrenees during winter, when it is not possible to rock climb in most of the range because of wet or cold weather, Riglos is a great place to head. And what a nice option!: hundreds of routes, up to 300m long, in a beautiful environment and with fast access from the parking lot in beautiful Riglos village… 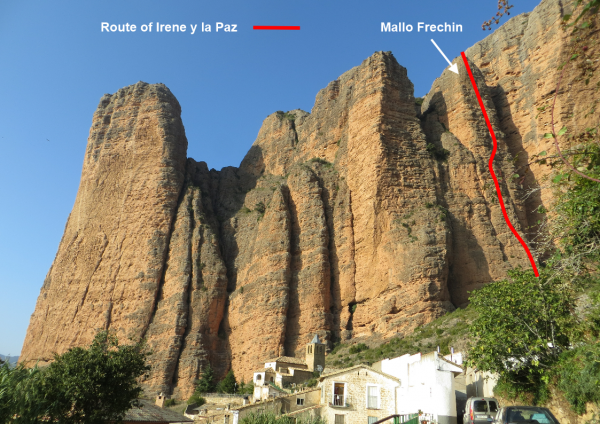 The route of Irene and La Paz

So, it was not difficult to take a decision when my friend Jon and I planned to climb together last Friday: “let’s go to Riglos to do some nice multi-pitch route!” We didn’t want to climb a very demanding or very long route, as the weather was a bit variable.

So we chose “Irene y la Paz”: a 190m ascent of Mallo Frechin that I had already done some months ago, with 6c as maximum grade, south orientated and with possibility to go down rappelling in any moment. 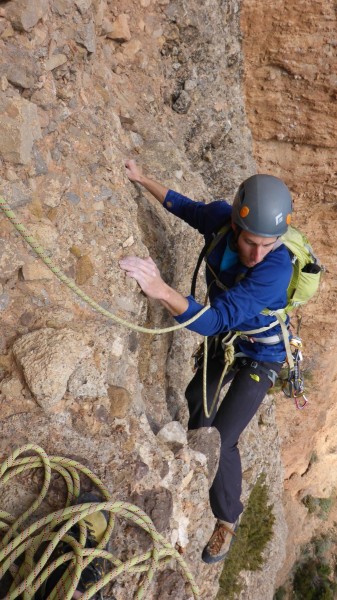 As my friend Jon hadn’t climbed this route yet, we decided that he should be the one who led the 2 most difficult bits of the route: a 6c and an other 6b+ pitches. Jon was really exited about it, as he hadn’t had the opportunity to climb in Riglos for several months, and everybody had told him that Irene y la Paz was a beautiful route. As I expected, he definitely enjoyed and liked it.

The walk to the start of the route is nice and fast: no more than 15min from the parking lot, by crossing the village and walking up an easy path that leads to the bottom of Mallo Frechin. The way down can be done walking on an narrow but quite easy path, that follows a short ridge from the top of the Mallo and then goes down a steep and straightforward ravine. So it did not involve any difficulty to go and come back and we could enjoy fully our climbing day. 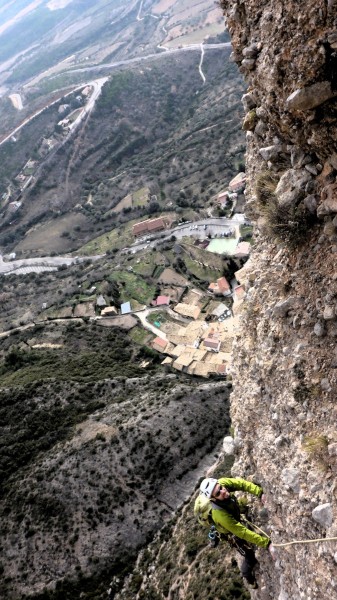 Irene y la Paz is a quite recent route, as it was bolted in 2012. Its equipment – bolts and belays – is of good quality, and it is bolted in a rather secure way. That makes it different from many of the routes in Riglos, that were bolted in the 70′s and 80′s, according to a risk assessment practice that was a bit lower than todays standards!

Although we both had to fight hard in the most difficult bits of the route, Jon and I were able to climb the route without any falls or mechanical aide. The climb was really enjoyable, very sustained on its grade and with beautiful overhanging sections. As the route is quite recent, the rock is not polished at all – that is not so common in Riglos. And another good point about the route was there were very few loose rocks, a part from the very first pitch of the route.

It was a great day’s climbing and I can’t wait to head back to Riglos to climb again!

The wild flowers of the Pyrenees are justifiably famous. Known as the flower garden of Europe the alpine flora is spectacular throughout the END_OF_DOCUMENT_TOKEN_TO_BE_REPLACED